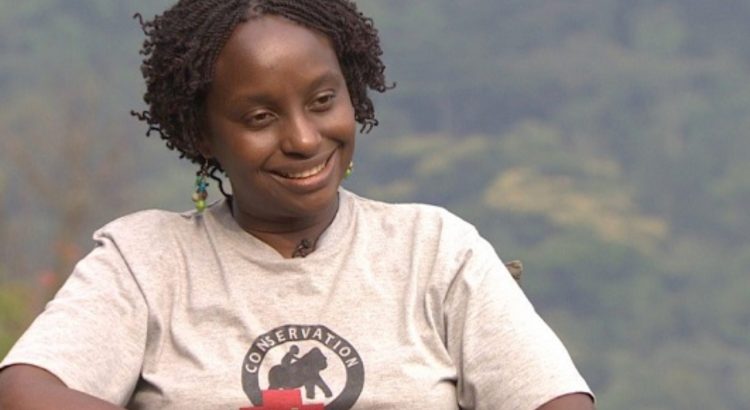 By Nicholas Asingwire, Sautitech on 27 July 2018

In 2003, Dr. Gladys Kalema Zikusoka started CTPH or Conservation Through Public Health.  She had 8 years ago graduated from the Royal Veterinary College, London with a Bachelor of Veterinary Medicine, scoring a job at Ugandan Wildlife Service, now the Uganda Wildlife Authority (UWA), as Uganda’s first wildlife veterinary officer.

With half a decade of experience in dealing with wildlife, Dr. Kalema-Kizusoka had learnt that animals, especially gorillas which share 98 percent of DNA with human beings, were increasingly getting exposed to danger, having gone through two traumatic periods of scabies outbreak: in 1996 and between 2001 and 2002. Conservation Through Public Health was started to offset such tragedies.

Dr. Kalema-Zikusoka had also spearheaded the first wildlife translocation to restock Uganda’s national parks following years of poaching during Uganda’s civil wars. And in that same year of starting CTPH, she obtained a Master of Veterinary Medicine from North Carolina State University after conducting research which demonstrated the high risk of tuberculosis (TB) transmission between people and mountain gorillas.

At CTPH, Dr. Zikusoka and her team of 15 continue to promote gorilla conservation by applying a number of methods aiming at facilitating the co-existence of human beings, wildlife, and livestock in and around protected areas in Africa.

After two years of existence, CTPH built a Gorilla Research Clinic in Buhoma, Bwindi Impenetrable National Park’s main tourist site, and it has since been expanded to a larger Gorilla Health and Community Conservation Center. At this facility, the CTPH website shows, tourists are given a behind the scenes tour of gorilla conservation. CTPH officials do this by explaining “our programs including gorilla health monitoring, community health, and livelihoods.”

A sip for gorilla survival

Gazetted in 1991, Bwindi Impenetrable National Park, the home to almost half the world’s population of mountain gorillas, is surrounded by a community of coffee growers because of being on a high altitude, covered with fertile soils. But after visiting the area several times, Dr. Gladys Kalema-Zikusoka discovered that most of these farmers were not getting a fair price for their harvests.

From this, she realized, the farmers “were struggling hard to survive, forcing them to use the national park to meet their basic family needs for food and fuelwood.”

Something had to be done. So, in 2015, Gorilla conservation coffee, or GCCoffee, was started. The resources to put the project together were obtained from CTPH and World-Wide Fund (WWF) Switzerland, the largest environmental and conservation organization in Switzerland. Organized as a charitable foundation, WWF Switzerland is part of the global WWF network, whose influence extends to around 1,300 conservation projects in over 100 countries around the world, according  to Optimizely.

GCCoffee is a social enterprise and it kicked off with seventy-five coffee farmers, who only grow arabica coffee. The number has since grown to eighty-five, prompting the formation of a group to unite them called Bwindi Coffee Growers Cooperative.

To be part of the cooperative, Dr. Kalema-Zikusoka says, a farmer must have at least 2 acres of  arabica coffee. This is inspired by the fact that they want to only to take on farmers who are ready to put in the work and take coffee farming seriously.

Some of the farmers like Vincent Butamanya, 63, who is the vice chairperson of the Bwindi Coffee Growers Cooperative has a farm that sits on 30 acres of land with about 16,000 Arabica trees of below 20 years. GCCoffee says it is working closely with him to ensure that he produces “at least 16 metric tons of coffee in the coming seasons.”

The social enterprise has a plan of coordinating at least twenty of the farmers to have their farms turned into models so that the rest can emulate them. So far, according to Dr. Kalema-Zikusoka, one of the farmers has been given a loan to reinforce his plantation.

Being the biggest buyer of the coffee produced by these farmers, GCCoffee ensures that farmers are walked through the best farming practices such that they have good quality coffee. Most of the coffee is bought in cherry form, according to Dr. Kalema-Zikusoka, but for the farmers who are able to process it further, they are allowed to add value to it for more rewards.

Only two farmers have poppers currently, but there are plans to acquire more of these, she told me. The team of GCCoffee organizes workshops and, in some cases, they move from farmer to farmer to conduct sensitization.

Gorilla Conservation Coffee currently deals with farmers growing only Arabica coffee. According to Dr. Kalema-Zikusoka, growing Arabica coffee requires more input than Robusta (which is also widely grown in the country); they knew that by dealing with Arabica coffee growers, they would be working with committed farmers.

That being said, Arabica is generally better than Robusta in many aspects, including market demand, price on the market. The only difference is that Robusta is easier to grow and it can be cultivated in different areas. The veterinarian, however, told me that Robusta will also be supported with time since some people like a mixture of both.

One sip at a time

To add value to the coffee and create a powerful brand for it, GCCoffee opened up a coffee shop where they sell the coffee. They have also partnered with multiple establishments, including hotels, airports, tourist resorts, national parks and gift shops to distribute the coffee.

Their first coffee blend has been named Arabica Kanyonyi Coffee after Kanyonyi, the former lead silverback gorilla of Mubare Gorilla Group, the first group habituated for tourism at Bwindi Impenetrable National Park, Uganda, who died in 2017. Dr. Kalema-Zikusoka told me she knew him from his young age. He was 21. The coffee can be bought by visiting various locations in  Uganda, or online when in Uganda, USA, New Zealand and Canada.

A pack of Arabica Kanyonyi Coffee (right) is seen placed besides a tea container and a cup. (Picture: GCCoffee)

I met Dr. Gladys Kalema-Zikusoka recently at their first coffee shop, Gorilla Conservation Café, located at Plot 19, Portal Rd, Entebbe. On that afternoon of July 4, Deborah, a happy-go-lucky barista at the facility who declined to give me her last name, walked me through the different types of coffee they make. After the insightful lecture, we concluded that I should go for latte macchiato, a combination of milk and Espresso, or concentrated coffee, as I wait for the doctor to arrive for this interview. The coffee shop was opened in December 2017. It is positioned at an exclusive building away from the noise, making it a safe go-to place for people looking to have peace of mind or a quiet rendezvous. 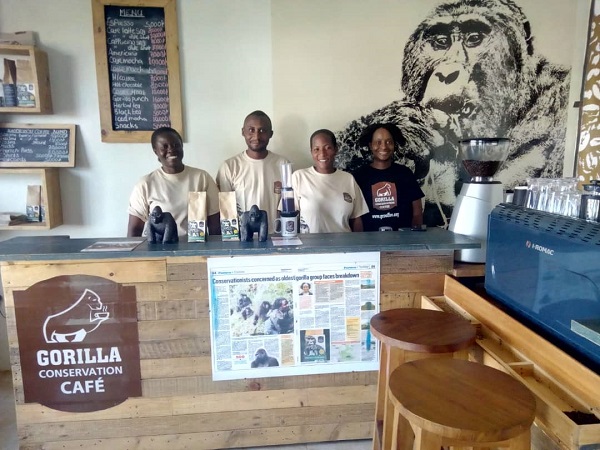 The writer (second from left), Dr. Gladys Zikusoka (extreme right) and the baristas pose for a picture at Gorilla Conservation Coffee Cafe in Entebbe

These organizations have provided support in different ways. For instance, WWF Switzerland has offered a loan to support coffee farmers, GCCoffee has won a SAG-SEED award and the latter is helping the former in developing a business proposal to obtain funding, Nucafe processes the coffee and UCDA has trained GCCoffee staff.

Arabica Kanyonyi Coffee has so far been sold, through both crowdfunding and other online platforms in Uganda including Jumia and GCCoffee website and local outlets in Uganda and other countries including New Zealand and since June this year, USA and Canada. The choice of countries has been based on friends and tourists who liked the coffee and were willing to market it in their countries.

Just as any other starting venture, GCCoffee has encountered a series of challenges. One of the key challenges has been setting themselves apart as a different brand than what people have been seeing on the market.

“One of the first challenges was describing to people that our coffee is different from other coffees on the market,” Dr. Kalema-Zikusoka told me that afternoon, adding that there are many other coffee dealers who “label themselves as gorilla coffee” but are not necessarily into conservation. They are just using the name as a marketing tool.

“Differentiating ourselves from those other companies has been our first challenge but we are hoping that our marketing is improving,” she said. According to her, “unless someone really knows about conservation, they sometimes confuse us (coffee brands).”

Another issue they have had to deal with is “getting the farmers to produce quality coffee”, but she says they are “addressing it through showing them that we can only buy good coffee from you.”

“That’s already enough to change the way someone treats their coffee,” she said. “They know that they want to get a good price, they want to pay school fees.”

The design of the program also reflects that farmers are shareholders in the venture so they have to work hard to protect it. Farmers, Dr. Gladys told me, are informed from the word go that GCCoffee is not “a donor project or NGO, this is a business; we have a loan we’ve to pay back so we’re all in it together.”

This style of operation has helped build loyalty from farmers, preventing them from selling coffee to other dealers. Farmers also like the initiative since it has helped them to build a brand and their coffee is bought by GCCofee at a higher price than the ordinary market price.

GCCoffee is also still facing challenges of raising funds. Dr. Kalema-Zikusoka says that it’s difficult to find investors who value the conservation as much as the finance. “There are not many out there. So, yer, raising funds is difficult as well. Raising funds is not easy as well,” she confessed. They have also not got direct financial support from the Ugandan government apart from non-monetary relationships they have with government agencies dealing in tourism like Uganda Tourism Board and UWA. This kind of relationships involves allowing them to sell their products at national parks and showcasing their products at events organized by these organizations.

Dr. Kalema-Zikusoka says that efforts are underway to join Sustainable Coffee Challenge-Conservation International from which they hope to raise “our fundraising chances.” They have also previously participated in an accelerator program organized by GrowthAfrica. To ground herself in non-profit management and business, she has also obtained a certificate in the management of non-profit organizations, from Duke University and in 2016 she got a Master of Business Administration from University of Milan and Tangaza University College, in Kenya.

She has also been featured in documentaries in National Geographic, Animal Planet, MNet and Uganda Television.