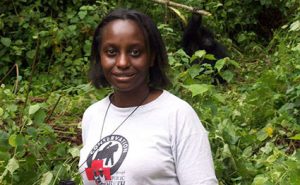 Dr. Gladys Kalema-Zikusoka believes in love at first sight because it happened to her.

It was back in 1994 when she was a veterinary student at the University of London’s University Royal Veterinary College.

She had travelled home to Uganda to do field research at the Bwindi Impenetrable National Park when she met and fell in love with Kacupira.

Kacupira was a silverback gorilla, and his name in the local Rukiga language means ‘’broken hand.’’

“Kacupira was so calm and just watched us. Watching him on that day, I felt a real connection with him.” But tragedy struck soon after that fleeting meeting. Kacupira’s group got infected with scabies and was wiped out.

Dr. Kalema-Zikusoka recalls that she was heartbroken and “That’s when we realised that gorillas can get infected with human diseases carried by the local communities whom they share their habitat with. Before that we were more concerned about tourists infecting gorillas. Now another big threat was the local community.”

She became a crusader to save the Bwindi gorillas and founded the Conservation Through Public Health in Uganda in 2003.

Dr. Kalema-Zikusoka is soft-spoken and easily gets lost in a crowd, that is until you engage her in conversation, especially about mountain gorillas.

Her voice becomes animated and her demeanour changes to that of a person on a mission.

Ours was a chance meeting at the Louis Leakey Auditorium at the National Museums of Kenya in Nairobi recently where she was attending a Kenya Museum Society talk on gorillas by the English couple John and Margaret Cooper.

John is a veterinarian and pathologist and Margaret an animal lawyer who worked with Louis Leakey as his unpaid volunteer on apes between 1950 and 1970.

Kalema-Zikusoka knew she wanted to work with animals from a young age.

In high school, she revived the defunct Wildlife Club and today she is the chairperson of Wildlife Clubs of Uganda, an offshoot of the Wildlife Clubs of Kenya, the oldest grassroots organisation of its kind, started in 1968 to teach students wildlife and environment conservation as a non-academic subject.

Coffee and the Gorillas

With the demise of Kacupira and his group, Dr. Kalema-Zikusoka’s research led her to the coffee farming community around Bwindi.

“They are poor and eking out a living as small scale coffee farmers,” she explains. Since coffee trees are bushy, they are ideal as gorilla hangouts and farmers came up with scarecrows dressed in dirty rags to keep them off their precious crop.

But the farmers went a step too far. The dirty rags were infested with the highly contagious scabies-causing mite, Sarcoptes scabiei.

Although easily treatable in humans, in the great apes it proved lethal.

Since poverty plays a big role in keeping people unhealthy, she saw an opportunity to improve the livelihood of farmers while saving the gorillas at the same time.

Although coffee is a premium cash crop, the farmers were receiving a pittance for the world’s best loved beverage.

CTPH came up with a social enterprise, the Gorilla Conservation Coffee in 2015, an idea that has transformed the lives of the coffee farmers and the great apes.

“If we could lift the farmers out of poverty by getting better prices for their coffee, we could improve their living standards and save the gorillas. This became our focus,” she says.

The day I met her, Dr. Kalema-Zikusoka was wearing the trademark T-shirt with a gorilla and a coffee bean.

“Since 2003, CTPH has not lost a single gorilla to scabies,” says the proud gorilla crusader. But there is still a long way to go as she says for there are many more farmers out there who need to be supported by Gorilla Conservation Coffee.

“The other good news is that Ugandans will not kill a gorilla now because of the income they receive from the great ape. We also generate income from tourists walking through the farmers’ coffee fields to reach the park.”

With every sip of Gorilla Conservation Coffee, a gorilla life in Bwindi is saved.